"Baby You're A Superstar". - See the article from Essentialmums.co.nz

For some parents toddler modelling or acting may conjure up images of controversial TV show Toddlers and Tiaras, for others the thought their tween or teen might star on a TV show, or ad  campaign might not have occurred to them. Whatever your initial thoughts are, modelling and acting can be a positive experience, as long as parents stay in control.

It isn't always glamorous and requires serious dedication, but the world of being an extra or a model is a great way to get into film, boost confidence and to make some extra cash.

Background Talent, the only online booking agency in New Zealand which supplies talent nationally, represents actors, artists and extras for commercials, films and television and has a dedicated kid's talent section.

"We do Huggies probably once a year and Treasures and that sort of thing. For children generally, as often as you see a child on TV is as often as we get a chance to submit for them," explains Background Talent Director, Sarah Valentine.

"Just in our normal daily life, we don't know what is coming until it hits the inbox... from from one minute we could be asked for a baby to play a vampire baby and then somebody will call up saying they are looking for a baby for a Huggies campaign, so you can get the totally opposite spectrums."

Of course, finding parents who don't mind the make up artist putting fake fangs and goo on their newborn is not that easy, but parts vary and can include feature films.

Cameron Bell, 14 from Hillsborough, Auckland  has starred in a variety of roles, including a cooking show and an El Paso ad, since joining Background Talent and more notably had a part as an extra in the recently released New Zealand film Two Little Boys.

The film which stars Bret McKenzie (from Flight Of The Conchords) and Hamish Blake (from Hamish And Andy) has been described as a "black comedy of errors" with loads of laugh-out-loud moments.

Although Cameron was an extra for a relatively short scene, he was flown to Invercargill for four days with his gran and got to experience all the excitement of being part of a feature film.

His mum, Anya, hadn't planned it, but ended up signing all three of her kids, including her youngest son Jeremy, 9, with Background Talent after signing up her daughter Yasmin, 12, a few years ago.

"I had signed up my daughter and she got herself a couple of jobs. At the time all my kids were quite young so when one of us went somewhere, we all went. Sara suggested we all sign up, because chances were we might all end up working on set. So instead of one of us working and the other three sitting around, we were all being paid," she explains.

Here is looking at you kid

Cameron describes being on the set of the movie as an awesome experience.  "It was a lot of fun! I spent most of my time on set and the crew were very nice. The sound guy let me listen to what he was listening to on the first day. I got to meet the two main actors, the director and the writer," he told Essential Mums.

"I also got to do some sight seeing and held a Tuatara. My gran came down with me and she got to see lots of cool stuff as well."

Although he has plans to be an aircraft engineer when he is big, Cameron says he might act part time, if he can.

Just as acting can boost a child's self confidence, modelling can also boost self-esteem.

An Auckland mum on the North Shore says her daughter's experience for a Pumpkin Patch ad campaign really boosted her self confidence.

After responding to a Facebook call out for models on a whim, her tween took part in her first "model shoot".

"I liked them because they don't put make up on the kids, they just play and the photographer takes pics," she explains.

"She's never been the girl who thinks highly of herself. She only did two shoots with them and she has a whole different feel about herself now."

Sara agrees: "I have met kids who are picked on at school who have low self esteem and have dreamed of their 15 minutes of fame and as fickle as it is, one day on Shortland Street and it changes their lives."

"They get to hang out with people they admire, celebrities that are so, so, so cool and then they get to see themselves on the silver screen, as do the kids who have been picking on them. I love making kids dreams come true. It's why I do my job."

Show me the money

Payment varies depending on the job. Pumpkin Patch pays their models in clothing vouchers, but other modelling and acting jobs can involve quite a lot of money, although it tends to be sporadic. And as Cameron points out, some of his jobs have been the equivalent of four years worth of newspaper rounds.

Anya has opened saving accounts for her kids to use the money they earn on something big, rather than letting it burn a hole through their pockets.

"I certainly don't want them to earn big money and spend it frivolously and suddenly it's all gone and you don't get another job," she explains.

One size doesn't fit allWhile it may seem like an "easy" way to make money, it takes time, dedication and flexibility to make it work.

"I like the fact it put my kids into a work situation where they see it's not all about them. It is hard work. They have all been on sets where you have to wait around for up to four hours doing nothing. You have to be quiet too and when you do get on set it might be really cold, it might get really hot and it can get really boring," Anya explains.

"That in itself has been a life lesson for them. If you want the money you have to do what you signed up to do. Having said that, it might not be for everybody."  Given that the casting agent could be called at any time for talent, parents would be required to be available for shoots at short notice.

This means last minute plans might need to be made, or possible time off from school.

Rejection might also be tough for little ones, but as Kelly Hotham from 62 Models explains, parents need to communicate with their child that it is not personal.

"The client is looking to fulfil their brief. It can come down to the client wanting green eyes not blue eyes and parents shouldn't wind the kids up with 'I hope you get this job' It's a job, not a competition to make friends or an entrance exam to Harvard!" she told Essential Mums.

"And it should never be about being 'good looking' it should be about having the ability to help the client sell the product. Kids can grasp this if you help them understand the process."

Psychologist Sarah Chatwin of Mindworks says that parents need to make sure they are not living vicariously through their children when it comes to acting and modelling.

She warns that for girls especially, self image and body image can be quite tricky and parents need to be aware of whether their child is self confident enough to take on this industry.

"Parents have to take very much a parenting role to help their kids take on the issues of self image. If it is not handled correctly, it can lead to problems later with body dysmorphic issues. Awareness is very important," she says.

Sara says that it is important that parents make sure their kids want to take part in any activity and that they don't put pressure on them to fulfill their parent's dashed dreams.

"You are you, your child is whoever he or she is and never the twine shall meet. You support and you give your kids opportunities, but above and beyond that we don't have the right to make our children what we couldn't be," she says.

"As with anything, before you start out gather all the information available and then make a decision on what you think will be the best for your child."

What you need to know:

1.    There is no specific "look" your child needs to have, every campaign and director is different.2.    If your little one is not picked for a campaign, they shouldn't take it personally, the director might be looking for a specific eye or hair colour.3.    Never bank on your child's talent being a revenue stream for you. Work is sporadic and pay rates vary.

Sara Valentine's top tips for parents who want to give it a go:

1. Find a great agent that you have a great rapport with. You need to be able to talk candidly and confidently with the person representing your child.

2. Join an agency yourself to see what the work is like - its great fun as an adult but it can be long hours, very repetitive and boring for littlies and you need to be sure that your child will enjoy him or herself.

3. Be patient, you may do 100 auditions and only get two jobs a year but that's just normal.

4. Make sure the agent is a good one, check that they are in the yellow pages, on the net, Facebook etc and that they are who they say they are.

5. Don't spend thousands of dollars on photo shoots, portfolios etc to do extra work you need a standard photo of yourself and be able to get to the job, if you tick those boxes then if you join the right agency you will get work.

To discuss this story further, visit the forums 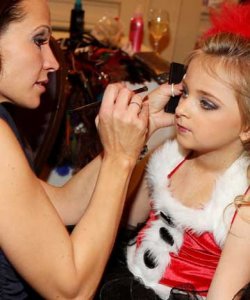