If reaction to The Hobbit footage at Comic-Con is any indication, Peter Jackson has another couple of blockbusters on his hands.

The crowd attending Jackson's Hobbit preview at the fan convention in San Diego today (NZ time) went wild over a 12-minute reel the filmmaker and his colleagues screened.

Broken into two films, The Hobbit: An Unexpected Journey and The Hobbit: There and Back Again, the 3-D epic is Jackson's prequel to his Lord of the Rings trilogy, whose finale won 11 Academy Awards, including best picture and director.

An Unexpected Journey arrives in theatres December 14, with There and Back Again following in December 2013.

The films are based on JRR Tolkien's prequel novel, chronicling how tiny hobbit Bilbo Baggins (Martin Freeman) acquired the ring of power that causes all the ruckus in The Lord of the Rings, Jackson's three-part adaptation of Tolkien's fantasy saga.

Along with Jackson and Freeman, The Hobbit panel at Comic-Con featured Lord of the Rings co-stars Ian McKellen, who reprises his role as the wizard Gandalf, and Andy Serkis, who is back as twisted ring-keeper Gollum. Also on hand was Richard Armitage, who plays the dwarf Thorin Oakenshield.

Jackson showed 12 minutes of footage that included a chillingly comic exchange between Bilbo and Gollum; a tender moment between McKellen's Gandalf and Cate Blanchett, reprising her role as elf queen Galadriel; and the pivotal moment when Bilbo discovers the ring.

A surprise guest was Elijah Wood, who starred as hobbit Frodo Baggins in The Lord of the Rings.

Freeman said he never felt intimidated as a newcomer to Jackson's team.

Jackson shot The Hobbit in 3-D and at 48 frames a second, twice the speed that has been the standard since the 1920s. The higher frame rate allows for greater visual clarity, though it requires costly upgrades to digital projectors for cinemas showing films at that speed.

At the Cinema Con theatre owner's convention in April, Jackson got a mixed reception for preview footage of The Hobbit shown at 48 frames a second. Some observers thought the images were too clear, so realistic that it took away from the magic of the film medium.

At Comic-Con, Jackson chose to show his footage at the traditional 24 frames a second, saying the best way to experience the higher projection speed is by watching an entire movie at 48 frames a second, not just excerpts. 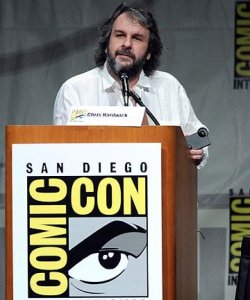