Matariki a time to give thanks to land, sea and sky

EXPAND
Matariki celebrations bring lots of that ancient, traditional knowledge back to our families again.

The rising of Matariki star constellations marks the start of te tau hou, the new year, according to ancient Maori traditions.

It is the name given not only to the stars in the Pleiades cluster, but to a festive season of celebration and preparations for the year ahead.

Astronomy played a huge part in the everyday lives of Maori ancestors.

Stars were what guided the first waka to Aotearoa and dictated every aspect of life - from planting and food gathering, to when hui and celebrations were held.

"Matariki was only a small part of it," says kaumatua Rereata Makiha. "Other star clusters in the heavens were very important to the way our people lived."

The arrival of European settlers and the Gregorian calendar saw traditional markers "sidelined".

Maori New Year was a time for connecting with, and giving thanks to, the land, sea and sky, for the community to come together to farewell the dead and acknowledge the year gone by.

The first new moon was central to activities of harvesting kai and the start for all things new. One of the last traditional festivals was recorded in the 1940s, and was not revived until the beginning of the new millennium.

"It's important to bring back a lot of that knowledge again," Mr Makiha said. "The observations of our ancestors were made over hundreds and hundreds of years and it's important to keep that history at the forefront before it is lost forever."

Today, the tradition remains culturally significant and is a time for friends, whanau and education. "Matariki celebrations bring lots of that ancient, traditional knowledge back to our families again," he says.

The constellations appear in late May or early June and are among the most unusual, says Auckland astronomer Dayne Laird, because they can be easily seen without telescopes or specialist equipment.

The stars may be hard to spot from central and south Auckland because of a cloud cap over the Coromandel Peninsula, but Mr Laird says they are nearly always visible from June 17.

Matariki will be marked in Auckland with a 31-day festival celebrating Maori culture, family, food and entertainment organised by Auckland Council in conjunction with a number of community organisations.

Event producer Mikki-tae Tapara says it is Auckland's only indigenous festival, and it holds special meaning for many residents here.

The festival, held in differing forms for the past 10 years, has begun to hold an important place in the city's event calendar, he says.

"It raises awareness of what Matariki is," Mr Tapara says.

"A lot of people aren't aware of the more intricate parts of what you can do over that period of time.

"Essentially it's about gathering with family and friends and speaking about planning for the next year, about remembrance for those passed on, and it has a lot to do with preparing the field for planting, and fishing and hunting." 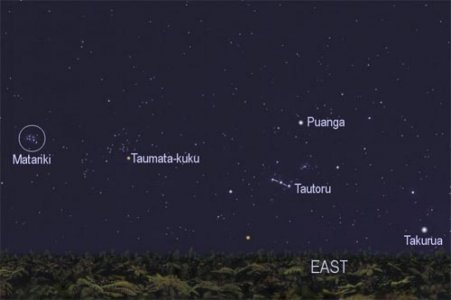