Genesis Potini lived with a bi-polar disorder that saw him hospitalised many times, and he came from a family with strong gang affiliations.

All of his life he lived cheek-by-jowl with poverty, ostracism, and challenges that would have broken anyone but a truly remarkable spirit.

But somehow, the chaos that afflicted his brain found room for a fantastic gift for chess, which Genesis honed until he could hold his own with some of the best in the country.

In particular, Genesis excelled at speed-chess, almost as though he derived some special edge from the storms that wracked his brain. But Genesis needed to do more with his life than just be a brilliant competitor.

With two friends he formed the Eastern Knights Chess Club. The clubs' aim was to teach the local children - and adults, if they wanted to learn - how to play the game. Genesis believed chess had saved him; that had taught him how regain control of his own unruly mind, and he was sure that it could do the same for the troubled kids he saw all around him in Gisborne.

In 2002, Jim Marbrook (Mental Notes) put together a terrific documentary on Genesis. That film - Dark Horse - introduced a lot of New Zealanders to Genesis' story, and now it has led directly to this absolutely stunning feature film.

The Dark Horse is based on actual events in Genesis' life. Via a quite brilliant opening scene we learn just how close Genesis is to slipping back into delusion and madness, and from that moment we are captivated by the character of the man and held by our awareness of the odds that he plays against every day of his life.

As Genesis, Cliff Curtis gives the performance of his career so far. Curtis is a respected character actor in the American industry these days, and his CV is littered with very good work in high profile movies and TV shows.

His performance as Genesis sees Curtis absolutely nail a difficult and nuanced character with absolute precision and grace.

The boy's dad is played by Wayne Hapi, who turns in an absolutely incendiary piece of work. I still find it hard to believe that this is Hapi's first film role.

With a smart and compassionate script, an exceptionally well-put together soundtrack, and a deft hand in the editing suite, The Dark Horse shines.

Perhaps in the last few scenes, the film wobbles towards melodrama. But by then The Dark Horse has us entranced and the tears and the emotional pay-off has been earned.

The comparisons to Once Were Warriors that some commentators seem driven to make are pointless, and more than a little condescending.

But I will say that The Dark Horse is one of the very best films that our country has ever produced. This is an instant New Zealand classic. Go see it. 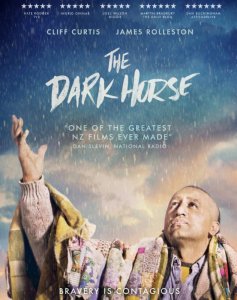