Check out the trailer - Our Talent loved working on this

It has plenty of swearing, it has nudity, and it has a fairly graphic scene involving a dead backpacker and an axe: Two Little Boys is not for everyone, but looks set to make a mark similar to that of the Sarkies brothers' first collaboration, Scarfies.

Based on the book of the same name by Duncan Sarkies, Two Little Boys features mulleted childhood friends Nige (Bret McKenzie, Flight of the Conchords) and Deano (Hamish Blake,Hamish and Andy) who embark on a road trip around the south with two purposes: dispose of the body of the backpacker Nige accidentally ran over, and keep Nige's mate Gav (and the police) from finding out what he's done.

It is a black comedy of errors set against a stunning backdrop – the Southern Scenic Route and its familiar attractions, Jack's Blowhole, Curio Bay, Cathedral Cave – and a story of what happens when you outgrow your friends.

Southlanders will no doubt recognise a few familiar faces, with almost 100 extras in the film chosen from within the region.

The film, which has a raft of quotable one-liners and laugh-out-loud moments, also stars some amazing wildlife that the crew was lucky enough to encounter on the shoot.

The first feature film for leads McKenzie, Blake and Maaka Pohatu (Gav), who all turn in entertaining performances,Two Little Boys is set to a great soundtrack and features some excellent early 1990s fashion that will likely bring back a few memories for viewers.

If you like something a bit different from your movies than the standard Hollywood fare, enjoy a good laugh and want to see for yourself how good Southland looks on the big screen, then check out Two Little Boys when it hits New Zealand cinemas on September 20. 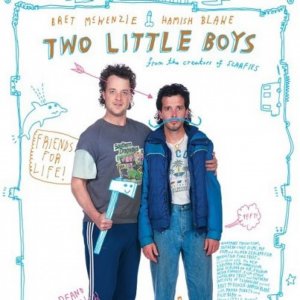