Best and worst films so far this yearZombocalypse nowKey moments in the evolution of the undeadHot trailer: Respect the tacheDouble VisionMel Gibson made child star cryStuff presents: Woodville - Episode 6Win with World War ZQuiz and win with LincolnFilm review: After Earth

An area of New Zealand history that has been swept under the carpet is the subject of a new home-grown movie which releases this week.

"It was absolutely fascinating, and in that respect is why I feel this movie is very important for New Zealanders to watch," says Antonia Prebble, who plays Rebecca Vickers, a wealthy member of New Zealand's settler society.

She calls on Paraiti (Whirimako Black), a Tuhoe medicine woman, to help terminate an unwanted pregnancy - an action at odds with Paraiti's belief that healing is about giving life, not taking it.

The film also stars Rachel House as Maraea, a servant who is intent on disregarding her Maori culture.

Prebble says for those working on the film, the main concern was making sure that it found favour with the people of Tuhoe.

"It was my greatest concern that they liked it and they were represented honourably and truthfully. I think they have (been), and someone said that it was the first time a real Maori story has been done like this on film.

"Anything else is a cherry on top - of course we want it to do well."

"The director spent like three years researching Maori culture and she is a woman of the utmost integrity," says Prebble.

"When it comes to cultural issues, she wants to maintain that. She wanted to make sure she was representing Tuhoe culture in an honest way."

Prebble, who starred in Outrageous Fortune and The Blue Rose, was drawn to the project after being told the role of Rebecca was written with her in mind.

"It was quite an interesting story, pretty gritty, intense and very fascinating," she says.

"I went and had a chat to her (Rotberg) and thought she was the most inspiring director. We would have these seven-hour meetings. I would go over to her house and she would feed me brownie and frozen yoghurt."

She describes the film as being dark and intense.

"It is not a rom-com. I would not go there as a first date. It is quite sombre," she says, before going on to praise cinematographer Alun Bollinger.

"The way he presents New Zealand is absolutely stunning. There is a lot of beauty, but it is offset by a lot of pain that all the characters are going through."

The actress says her character Rebecca is conflicted.

"I think she is quite a tragic figure and is working out who she is. She is a product of her environment. The movie is about finding your identity in many ways."

Prebble's one regret seems to be that she didn't get to visit many of the locations showcased in the film.

"My character never goes outside, so I just went to Alberton House and Highwic house in Auckland - both very cool locations, but not out of Auckland.

"The rest of the crew went to Ruatahuna and they filmed down there for three weeks."

Prebble says that there were a few costumes she really enjoyed wearing in the period drama, but one, in particular, stood out.

"There was this one beautiful velvet robe. It is a dusky colour and it was cut in a kimono style and just moved in the most beautiful way."

And for Prebble this will mark another occasion where she has been pregnant on screen.

"I think it is four," she says. "It is pretty ridiculous. I do not know why these things keep happening." 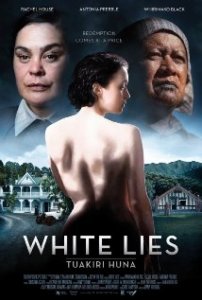