There were some fantastic moments on last night's episode of The X Factor. The minions from Despicable Me 2 had a bit of a sing-song, there were cute kids who had no clue why they were there, and The Manic Street Preachers performed a great song.

But there was also a stage invasion by dozens of New Zealand's reggae stars (for a good cause, of course) and in the end judge Melanie Blatt's girl group Gap 5 was voted off the show.

At the beginning of the show when the judges came out to play, a pang of jealousy hit me: If Ruby Frost can wear a bathrobe to work, why can't I?

Stan Walker stuck to his glasses rather than contact lenses - sensible given there could be tears - Daniel Bedingfield was his flowery, tartany self ("my comments will be serious but my pants won't be") and Blatt seemed a bit sad she had to appear without purple eye shadow.

And while host Dominic Bowden, seemingly wearing a bit of lip-gloss, wasn't getting tired of repeating what a shock last week's elimination of Tom Batchelor was, Walker just hoped some of the contestants would learn to play the game and "get hard".

But first we saw the contestants being treated to a touch of Hollywood at the New Zealand premiere of Despicable Me 2. Sure enough, it was one glitzy affair with at least two dozen preschool and primary school kids. The Ridges were there too.

Then it got busy on the stage: The Aotearoa Reggae All Stars, comprising pretty much everybody who has ever recorded a song in the genre in New Zealand, were performing the Herb's classic Sensitive To A Smile.

To make thing even more crwoded, each musician brought a kid to the stage, who all looked as if they didn't have the slightest idea of what was going on.

Che Fu then told us they have brought together 12 New Zealand reggae bands with the aim of stopping child abuse. It is a great project and a wonderful cause and I wish they had been given more time to speak about Mana Ririki and the work they are doing. But here's a link for you.

All I could think was, 'jeez, what a tough act for the Manics to follow'.

But first it was time to reveal the public vote (and I spare you the Bowden-esque pauses): Jackie Thomas, Benny Tipene. Moorhouse and Whenua Patuwai got through, while Cassie Henderson and girl group Gap 5 were left on the chopping block.

Then the Manic Street Preachers played If You Tolerate This Your Children Will Be Next. We should take this song to heart, kids, that is how it's done.

First up were Gap 5 doing Bruno Mars' Locked Out of Heaven with some awkward dancing, followed by Henderson.

I liked her performance of Miley Cyrus' The Climb - sure, she's not always hitting the notes, but her voice has come a long way from earlier performances.

Then it was time for the judges to judge.

Blatt told Henderson she delivered what was missing the night before.

Bedingfield thought his charge finally reconnected with the audience and if she picked the right songs she could have an international career, while he just didn't believe Gap 5 were ready quite yet: "Six more months and you could be great in New Zealand" (Maybe, even world famous in New Zealand?)

Bathrobed Frost said that she had fought for Gap 5 many times. She thought Henderson still needed to be developed but still reckoned there would still be a market for the teen, then voted against Gap 5.

And the role of king-(or rather queen-)maker fell to Walker again. Just for a moment I thought it might be too much for him and he would break down.

"Oh man, I hate that part of the job," he said, which is a bit unfortunate considering that's what he's there for.

He told Henderson her performance was a bit under par and pitchy, but he still sent the girl-group packing.

Gap 5 were a beautifully diverse and feisty troupe and these girls can sing. I think their downfall was a) girl groups are just not a big thing at the moment, b) it is harder to connect with a group, and c) they did fudge a couple of performances.

And before we were released we were reminded judge Bedingfield will be singing his new single next week.

But ahead of his performance for the masses, he will showcase his new EP Secret Fear at an invitation-only event in Auckland on Thursday.

We have a double pass for one lucky reader. To be in the draw send an email with your name, address, post code and phone number, to competitions@stuff.co.nz.

All entries must be received before 10am on Wednesday July 3 to go in the draw. Please ensure the email subject line says X-Factor. The winner will be notified via email on Thursday and has to make their own way to the venue. 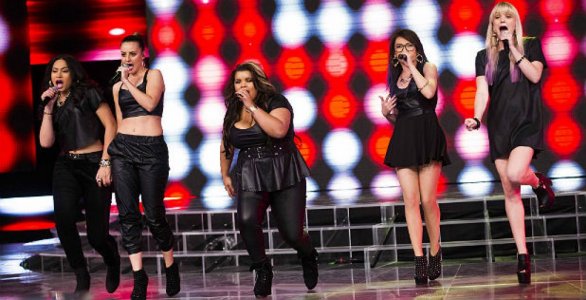