This remarkable story, based on true events and people, is set in WW1. But it is not your usual ‘war story’. It is the story of a group of men who refused to accept war as an answer, refused to believe that ordinary working men like themselves were ‘the enemy’, and refused to renounce their personal beliefs despite the unrelenting efforts of the Allied military machine.

Standing out against the jingoism of the day, these brave men declared their opposition to the First World War, a war fought thousands of miles away and for which New Zealand men were conscripted, many against their will.

We tell the story of the fourteen ‘conchies’ who were arrested and shipped off to war against their will, where on the battlefields and military prisons of Britain and France they were stigmatised and tortured in an attempt to break their spirit. New Zealand’s most famous conscientious objector Archibald Baxter, father of James K. Baxter, was one of these men.

This is a dramatic and brutal story of war but acts of cruelty from some officers were more than matched by acts of compassion from the common soldiers, as digger and pacifist alike confronted the futility of war. How the conchies dealt with the cruelty meted out to them is even more extraordinary. Their integrity, courage and kindness to the ordinary soldiers who dealt with them made them a much greater threat to the military hierarchy than did their politics alone.

We follow the conchies' journey from their initial proud stance when first arrested, through their time spent in prisons, punishment camps, an asylum for the insane and at the Front Line in France, until the end of the war heralds their return to New Zealand two years later. But not all of the conchies returned home.

Lippy Pictures is proud to be developing this telefeature for TVNZ with the assistance of the NZOA Platinum Fund. As with our previous Platinum Funded telefeatures for TVNZ (Until Proven Innocent and Tangiwai), Field Punishment No 1 is an extraordinary story, largely unknown to the New Zealand public. Given the burgeoning interest in our official Anzac history as we near the centenary of the outbreak of the First World War, we believe it is an important NZ story to tell and the right time to tell it. 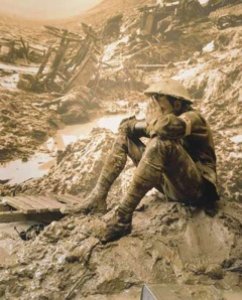